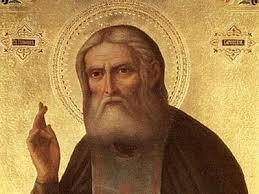 
St. Seraphim was born on July 19August(1), 1759, and named after St. Prokhor, whose feast day is celebrated on the 28th day of that same month. His father’s name was Isidore, and his mother’s Agafia. His parents came from respected and wealthy merchant families. Isidore had taken up the task of building a church dedicated to St. Sergius of Radonezh , but he died before he could complete it. He therefore conferred the task upon his wife. The young Prokhor often accompanied his mother as she supervised the church’s construction. One day he climbed with her to the top of the belfry, and slipped through the scaffolding, falling to the ground. His frightened mother was sure she would find him dead. But the words of the 90th psalm seemed clearly to guard the blessed child:For He shall give His angels charge over thee to keep thee in all thy ways. They shall bear thee up in their hands, lest thou dash thy foot against a stone. When she had descended to the ground she found the boy standing on his feet, whole and unharmed; an indubitable indication that Prokhor was under God’s special protection.